What’s Happening With the Goats Today at Gullringstorp ?

After a couple of days of wind, snow and rain, the goats were let out this morning. the conditions were not ideal but our goats were getting cabin fever. You can always tell on morning rounds just what the mood is when you enter the stable.We have most of the girls in the first section of the stable so when you enter there, quite often the ladies are all still “in bed”. They look so cute all snuggled up together. There are two to a box except our  4 tiniest ladies share a very large box.

Entering the next section of the stable is another story completely. We have had the occasion to enter and fine everyone still “in bed”. But usually as I stop and say good morning Pumpkin and Rose who are in the last box in the first section, I can hear the commotion in the next section of the stable. Nanna, if not in heat is usually relaxing on her “perch”. The boys have been “in bed” on some mornings but that is not always the case. Like this morning, they were up and spunky! Alika is head butting her door making quite a noise.

After all my mothers to-be , have been on the Milk Stand, Max our dog and I go out and walk the enclosure to access the condition after the last two days. It is still wet in some sections, but overall it would not be a day that the goats were forced to remain indoors. I grab my wheel barrel and Max and start to fill the boys hay rack and then take the boys out first. Boy are they ever happy to be out. I just hope it doesn’t rain. But if it does, we have two wonderful deep outdoor shelters for all the goats to get in and stay out of the rain. Most of my goats do not like the rain. Fingers crossed. There was a time in our goat raising that we would run out of the house at the first drop of rain and run the goats in. I soon realized that our goats cold withstand the elements to a degree and they did have more than adequate shelter from the elements.

The girls were also eager to be outside. They ran for the enclosure while kicking up their cute little heels! It’s always a sight that gives me immense pleasure.

Remember when it was time to place my two little boys in with the big boys and I was so upset?

Here they were as bucklings just before they made the transition: 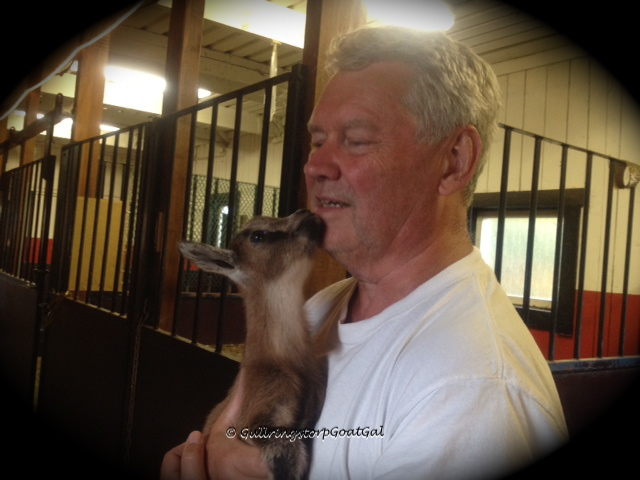 My husband with little Phillip 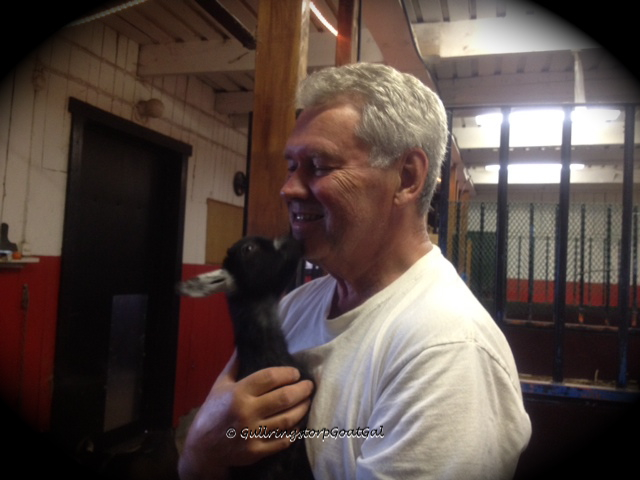 My husband with little Winston

Now by little babies are no longer bucklings,, they are bucks ready to spar at any given moment for dominance :

I led the boys over to their new hay rack and they followed like little I was the pied piper.

Just look how our little Winston has grown…

Phillip was thirsty so he left his palls eating

It wasn’t long before his pals came to join him. Everyone was thirsty , all of a sudden

Pip,, Toby and Balder wait patiently for their turn

The boys settled in and enjoyed being outside. The girls soon followed:

Mother-to be Iris, found a place to enjoy her hay

As you can see there is no grass anywhere, yet. Our enclosure is as barren as the surrounding fields so there is no grazing for our goats. The hay is important

My husband was trying to see if the outdoor hose was able to be used yet…unfortunately, it is still frozen somewhere on the line. All the girls are interested in what he is doing.

Keriana’s fur is taking a dramatic turn in looks, color and texture. She is a mixed breed goat with mother Frida a full bred Nigerian Dwarf and her father Julius was a white pure bred Swedish Lantras goat. At 4 yrs old, my black goat is now a fluffy grey goat resembling a Black-Faced sheep. 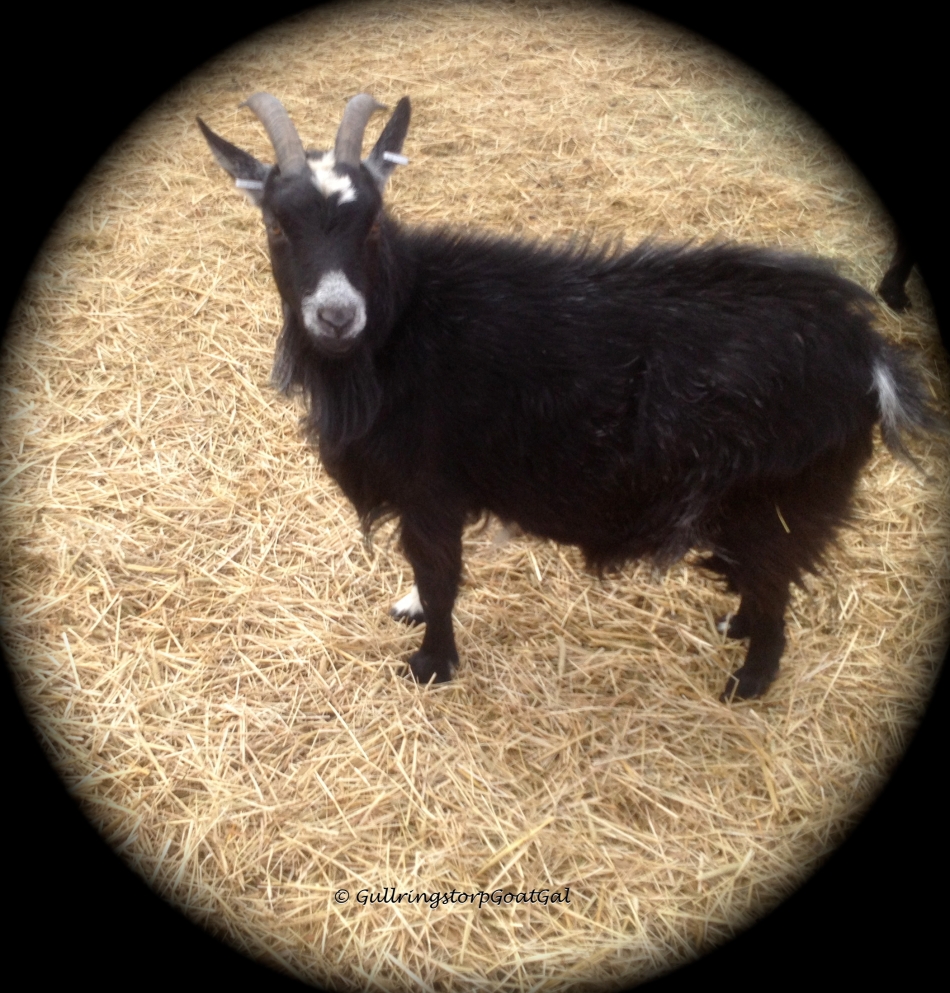 Mother-to-be Pumpkin is happy to be outside 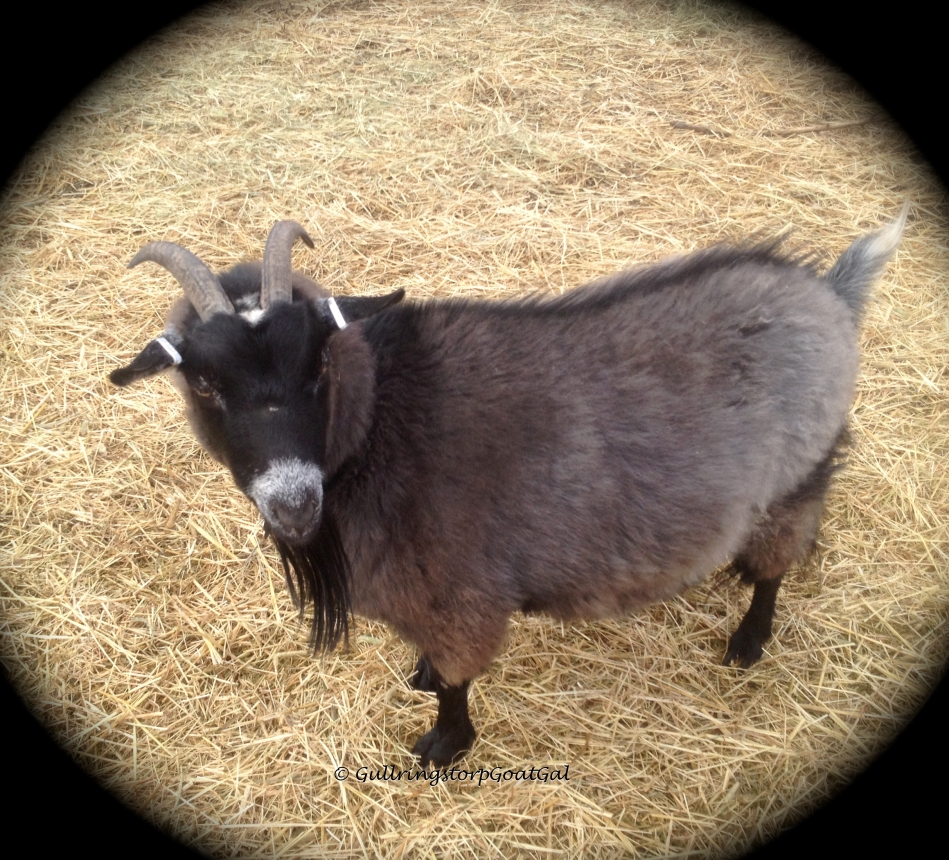 Sorry, just had to get another shot of Keriana’s fluffy new coat with the silky black strip running down her spine, black face and stockings

Mother-to-be Iris looking just as she should, round and full of babies. We think she will either have a very large baby or twins

We are continually making improvements around Gullringstorp and many of them are goat related. One of the biggest issues facing goat owners is wasted hay supplies. So often it falls through large hay racks that have large openings between the bars. You see, they don’t make hay racks for these small livestock. All of us have to improvise or try at building our own. We have a two-sided wooden rack that Leif built that fits one in Pumpkin and Rose’s box and the other side fits the sister’s Pansy and Poppy’s box. They have been working well except some waste in the sister’s box. The boys have the conventional horse hay rack  which works fine ever since Leif had some bars welded on to help keep the hay in. That was a good idea. The problem in  this box is 7 bucks. They can’t all eat at one hay rack and I don’t like to make situations that could prove volatile. So we tried horse hay bags. They worked fine for a while until the boys decided to sharpen their horns on them and rip them causing the hay to fall out. Alika, Keriana and Fiona have bags; they are not without their issues. Alika’s is always turned around. You see there is a nice round opening for the goat to stick their nose in to eat. This means she has to stand up and stick her head in from the top and eat. Keriana and her daughter Fiona have ripped he side of their bag loosing hay .

We bought 5 new hay racks and my husband has welded the bars on all of them. We won’t be placing them in the boxes until the weather gets better and our road gets better to be able to drive the tractor with the hay from the boxes. They still have the winter full level of hay and straw that keeps the goats warm during the winter. With the level up so high we can’t place them in till  the level is where it should be, much lower.

New hay racks for the boxes in the stable 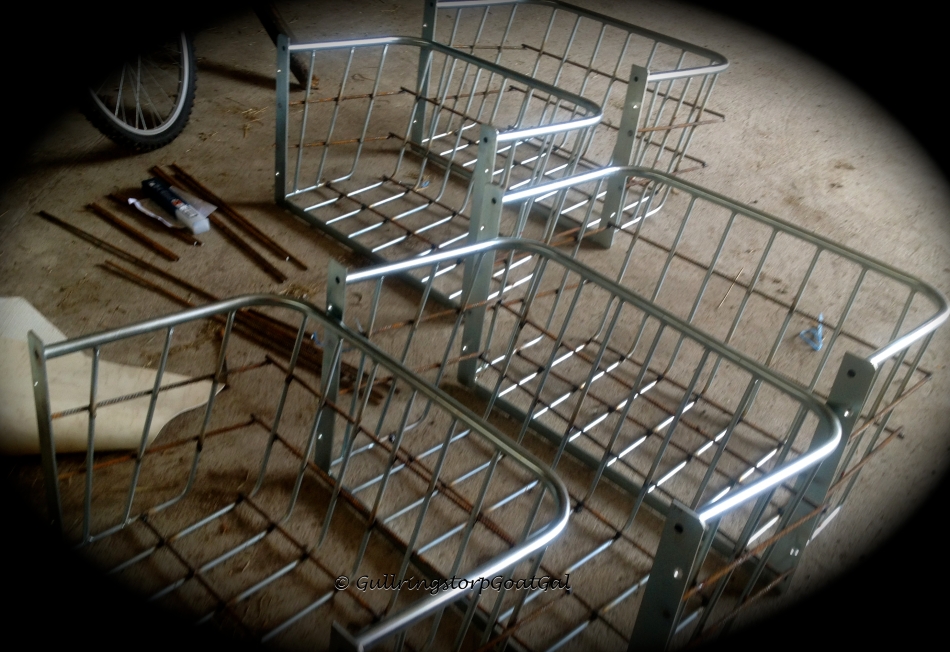 These hay racks are not complete yet. There will be a fencing material with smaller openings fit inside each rack. These are just the beginning of repairs and improvements that will need to be done here at Gullringstorp after the long cold winter.