Oh dear, the first thing I must do is apologize to everyone waiting for Iris to give birth. With all  that has been going on and being indisposed for nearly a month, I was way off in my calculation for her delivery date. I had it in my head all this time that Iris had been bred in the first week of November when in reality, according to my records, she was bred twice,  once on Nov. 25, and again on the 26th. This places her delivery date around April 19th or 20th. Darn!!!  No one is more disappointed than I. Well I am back on  track and it looks as if Iris was the only one on track all this time.

Iris and all our mothers-to-be are doing quite well .  We are happy that all the goats have been able to get out of the stable and enjoy fresh air, run,  play and relax in the sun. We are especially happy for the mothers -to – be. 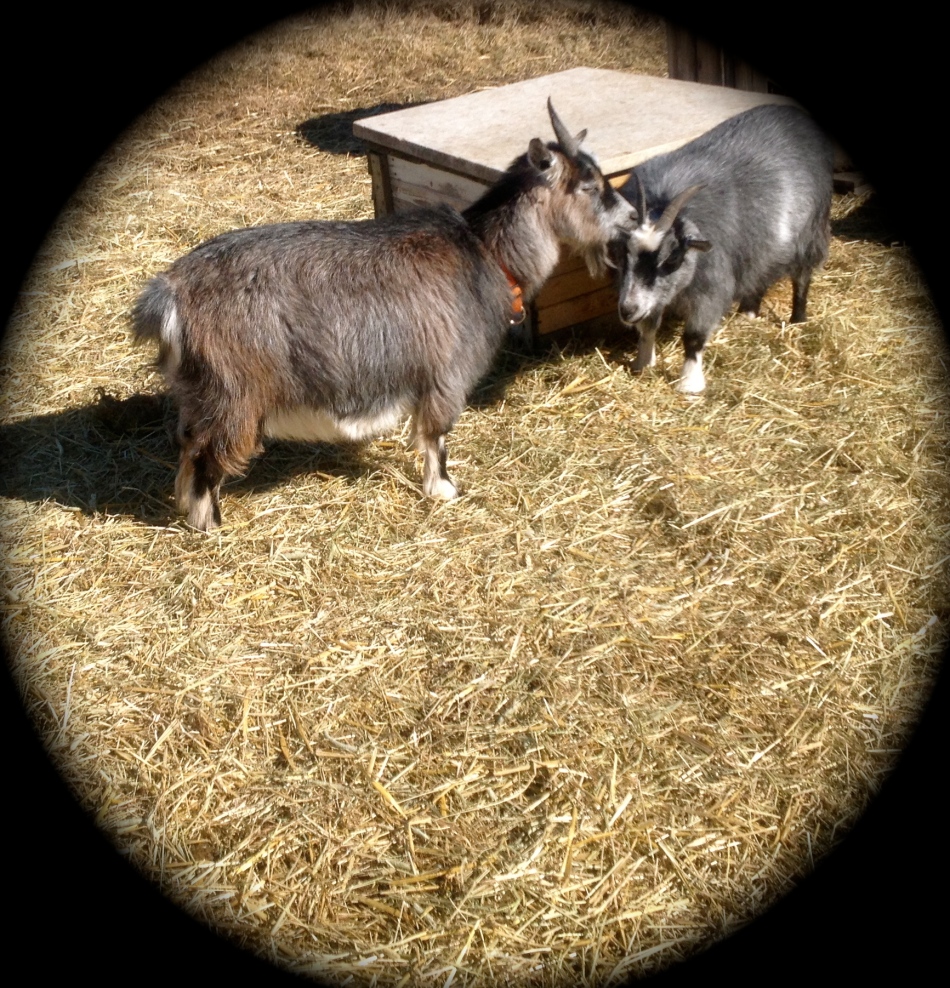 Iris happy outside with her sister Petunia

While we wait for our new babies to arrive, there is much to do around the farm. One of the things I make a point of doing, is putting into service, items that we bought with the property that we had not yet used. One such item is a large cattle feeder  that sits in the boy’s enclosure.

I have looked at it for years and wondered just how could we use it. There must be something we could use it for. The previous owner had steers at one point, so this was for them. First issue with this large piece of equipment was its location. I felt it was too close to the fence. We have young boys that live next door and I just wouldn’t want the goats startled by their playtime.

Then I got an idea, (poor husband hates when I “get ideas”, he knows what that means for him). Ok,  we will just move it further into the enclosure. Well, that was a no go!  The piece of equipment was set in concrete  beneath the soil. It was there to stay! Darn!!!

My youngest boys are no longer bucklings,  they are strapping bucks now,  so I it came to me , why not use this wonderful piece of equipment for the boy’s hay supply. There were a few posts in the front, that were in question, so my husband used a hack saw to remove them . They were oddly placed, not far enough apart, and just close enough for a mishap. For us a mishap usually means a head  getting stuck. So I am so glad those posts have been removed. My husband saw another potential issue; because the unit is so close to the fence, there was the possibility that a goat could  get into the unit and somehow jump over the fence. Well, that problem is now fixed. Now there is a large plank of wood attached to the backside so that even if they get the notion to jump, they can’t.

This morning the hay went into the equipment. My boys were not so sure, so I had to coax them toward the new hay location. Goats love and thrive on consistency so any change is received slowly. It might take a few days for the boys to catch on to the new routine, and they will be comfortable with the new location of their hay supply. It’s just like my mothers-to-be learning the Milk Stand routine. It was not so easy in the beginning with them. Some arrived at the Stand on t heir knees,  all were led by leash, some laid down on the stand and some wouldn’t eat. Now I don’t need a leash, they walk or run by themselves to the stand, hop up unassisted and begin eating. Just as the ladies learned , so will the boys.

Today was a real good start : 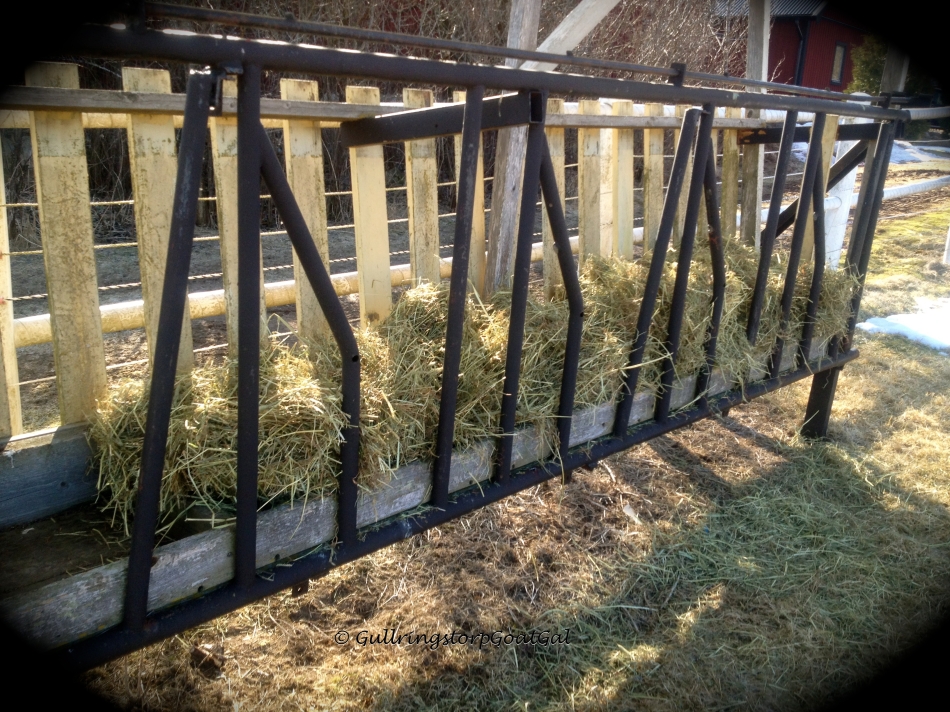 There was once a function to lock in the steer’s heads but we will not be using that . There’s room enough for our 7 bucks

I know, I know, who has 7 bucks??  Well, I do.  I have made a promise that any bucklings born this year will be sold. We have more than enough bucks. 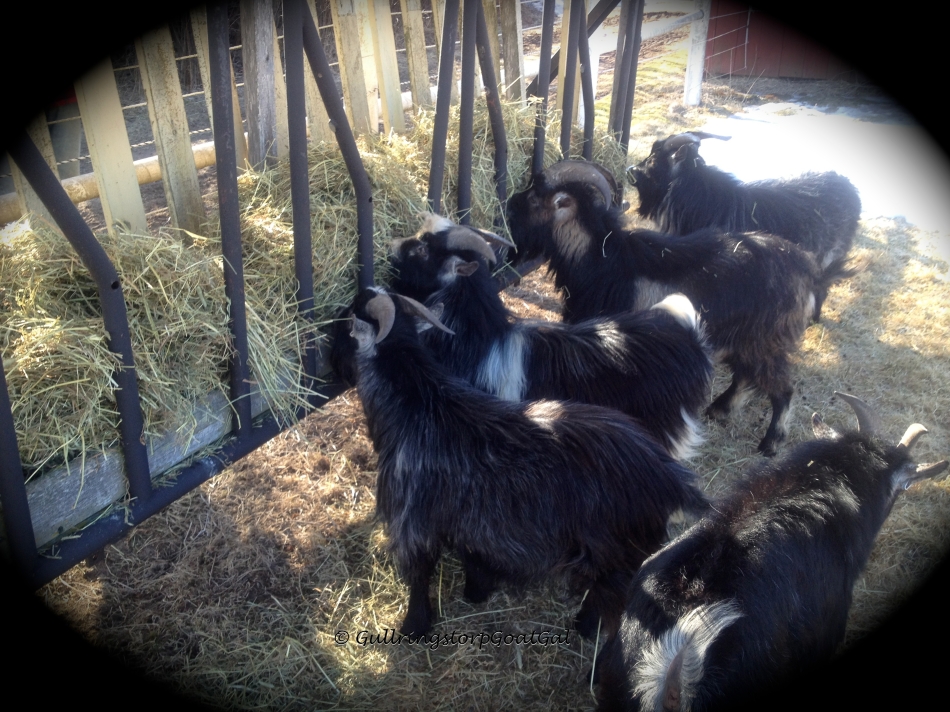 This is what I wanted to see. They finally got the idea! 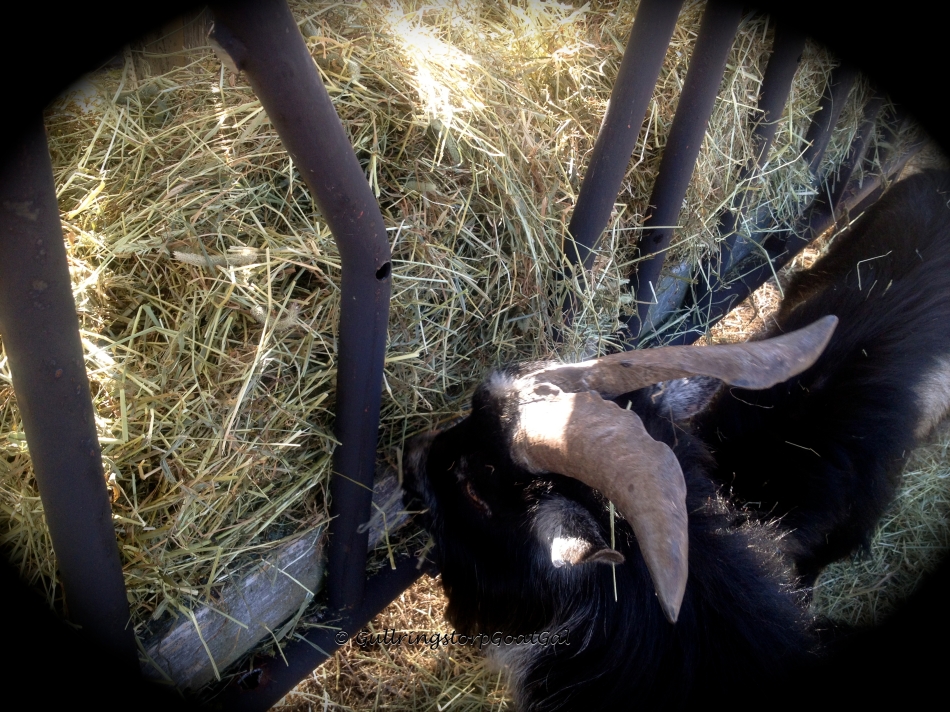 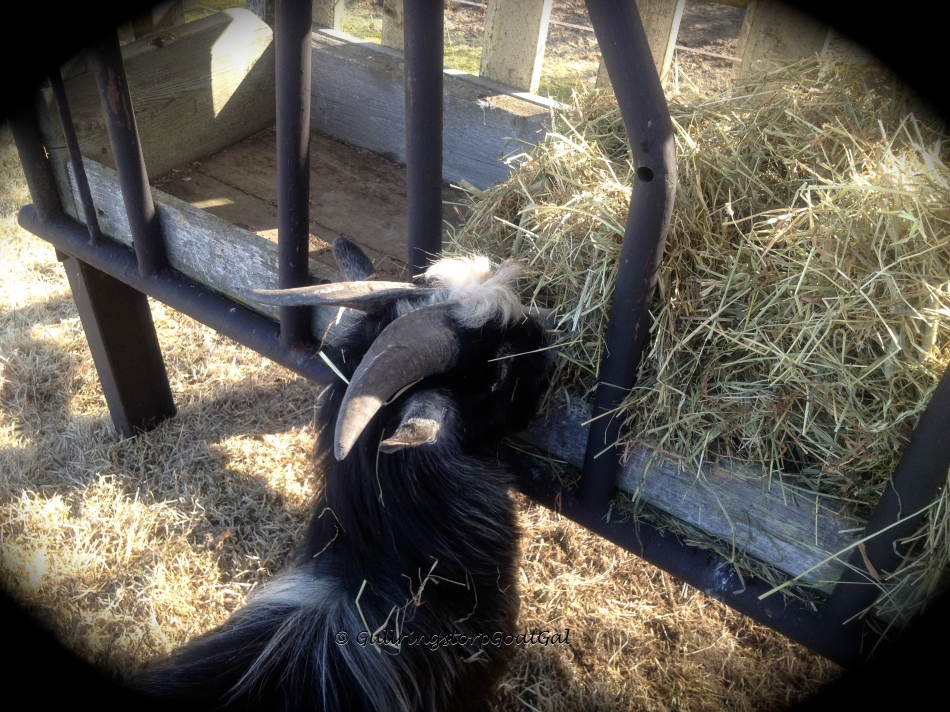 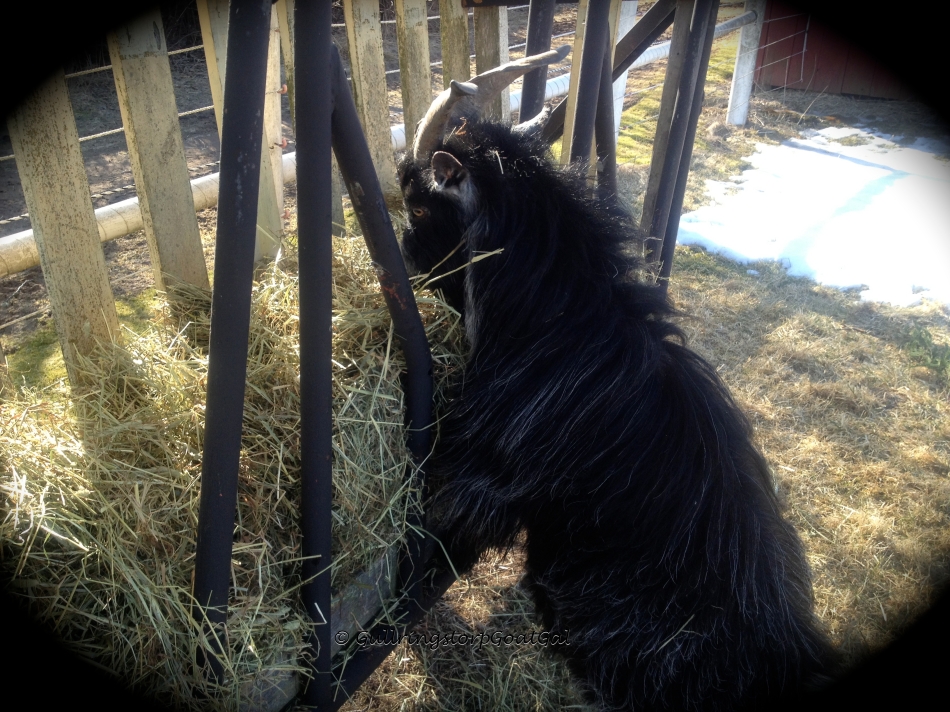 Little Pip has understood where the hay is

Look at my boys ! From the left; Phillip, Toby, Little Man and Baby Boy 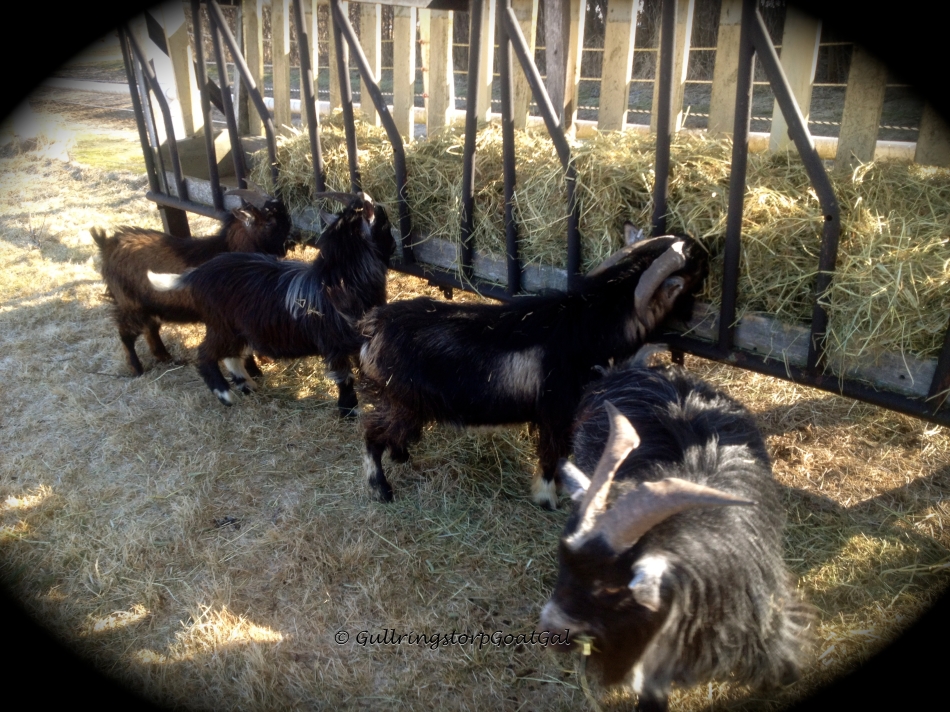 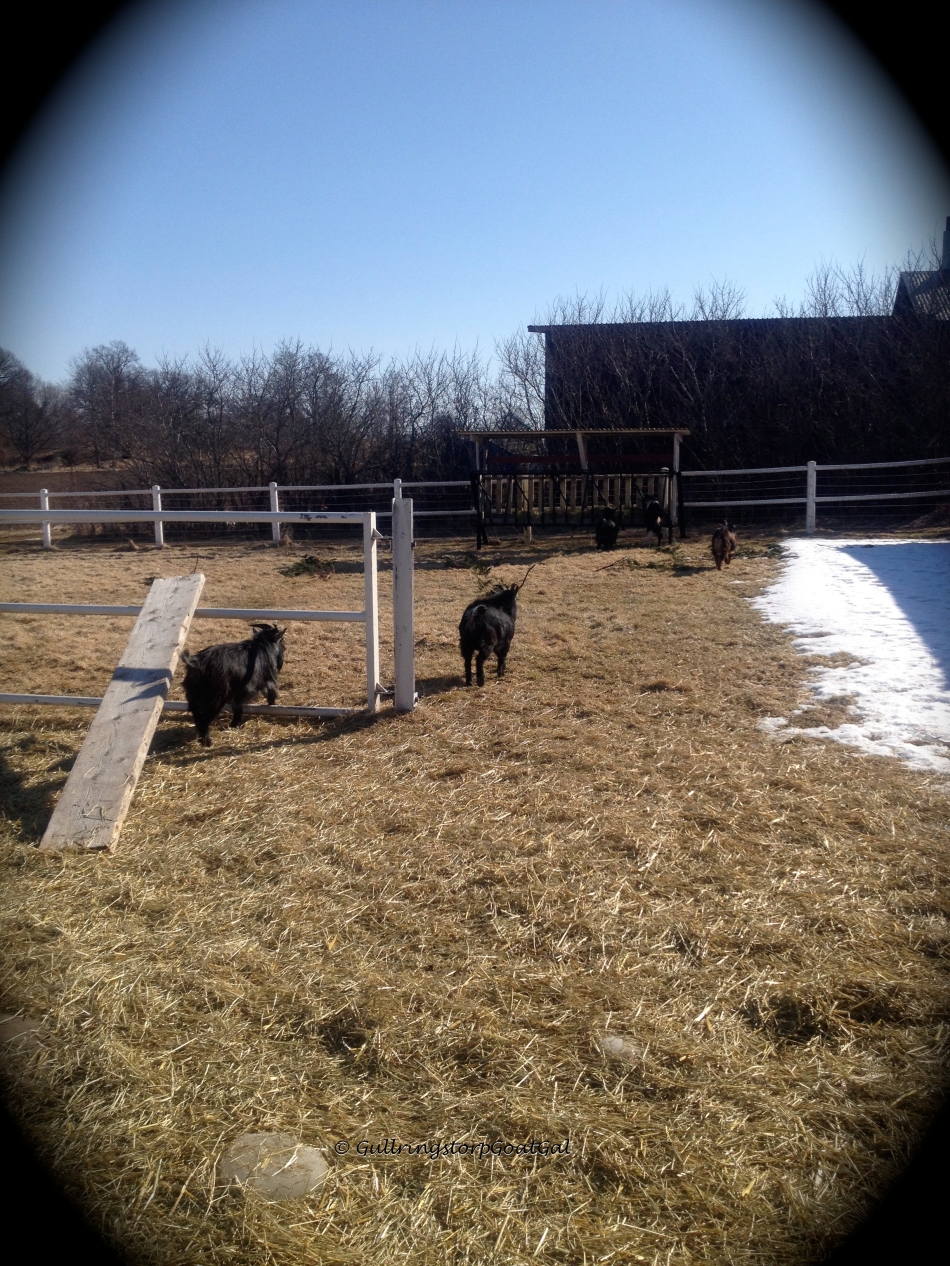 The boys have to walk a bit of a distance to get to the hay. They are used to the hay being in 4 piles on the ground just inside the gate. 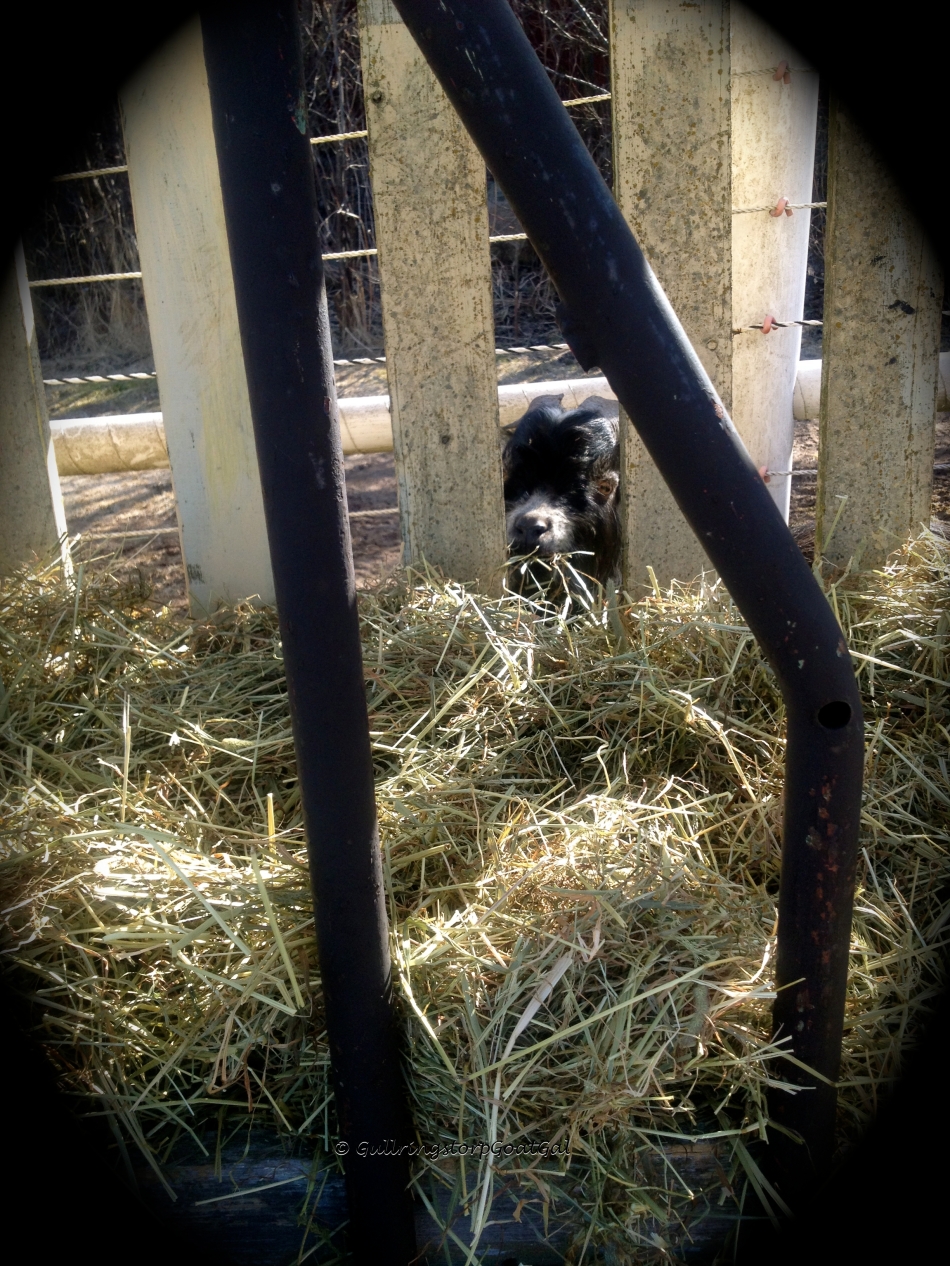 Winston decided to try the back side of the hay rack. He was lucky the power hadn’t been turned on yet. If he tries it later, he will have a shock to that cute little bottom

Welcome  back later in the month for Updates from the Maternity Ward and soon the Nursery  Ward at Gullringstorp.